I heard yesterday that a very fine priest, Janet Henderson, has resigned as Dean of Llandaff. She is reported to have found that the discrimination she experienced there made her job untenable. She was an excellent archdeacon, thoughtful, dedicated and reflective, and Janet undoubtedly faced misogyny in that role. I can’t imagine what she has been through that has brought her to resign.

I have been re-reading Maggi Dawn’s thoughtful and tear-inducing ‘Like the Wideness of the Sea: Women Bishops and the Church of England’. If you haven’t read it, you should. It tells the story of what prolonged anger and rejection has done to women in leadership in the Church of England over the last 20 years.

My own experience in the last 20 months includes lay and ordained men making it clear to me that they not only cannot recognise my ordination, but blame me both personally and as the representative of all women clergy for the numerical and financial decline in the Anglican church in the north east.

Today I am sad – for the women who serve the church as priests and deacons, whose ministry is still in a period of so-called reception; for those ordained and lay men and women who have left the church; for those women I know who carry the weight of unresolvable anger; and for the Church of England, whose mission is damaged by our internal strife. It’s another a sad day. 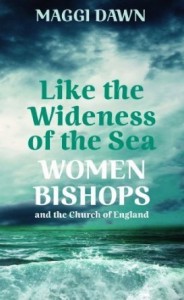