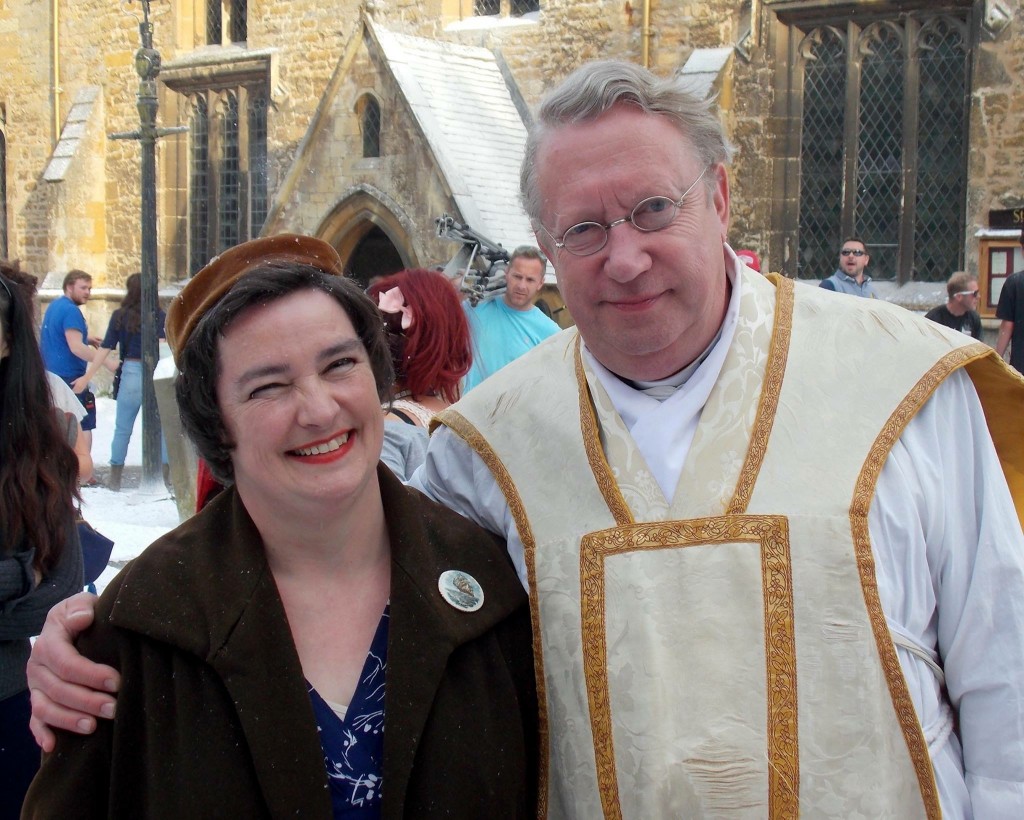 “If you are going to be an extra, this is the episode to be in”, mused the director. Which is why, at 10:30am on my day off, a BBC person knocked on the door of the Presbytery and told me to hurry down to costume to get ready for filming the Father Brown Christmas Special.

I’ve got short, straight hair, so it was fun watching the poor hairdresser trying to get it to curl around the edges of a little brown 1950s cap. Make-up was thankfully kept to a minimum, though the red lippy was rather nice, and then down to costum

e to find something that would fit me.

I had no idea of the level of detail of the costumes that the actors wear. On the warmest day of May I was kitted out with a genuine 1950s bra and stockings, dress and coat, gloves and scarf, pretty little brooch and shoes. Then up to my church to talk silently to another extra as the main actors of the show led Mary and donkey endlessly up and down the graveyard.

h point of the day was hearing Mrs McCarthy tell the director to “Get that SA (support actor) out of my way”, when I got confused about where I was supposed to be going. My parishioners and most of the cast didn’t recognise me in this new role! And the glorious paper snow which looked real and made the whole village turn out and smile.  The low point – too much waiting around with nothing to do.  And hands sweating inside leather gloves.

Come 23 December, I was glued to the screen wondering if I had even made the final cut. Those who were VERY sharp-sighted noticed my 3 seconds of fame. After 4 hours of filming, keeping those gloves and Mrs McC’s scarf on, and stocking seams straight – all for a glimpse of my hat. The lesson – it’s much more fun being a director than being a supporting actor. Never again…