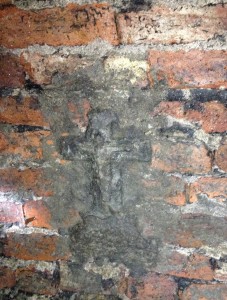 This week we took a trip down Ouseburn beck to the Victoria Tunnel which runs for 2 1/2 miles under Newcastle city centre. It was built by the Victorians to transport coal from Spittle Tongues Colliery to the river Tyne, and fell into disuse in 1860 until the city engineers converted it into a WW1 bomb shelter.

Dark, damp, cold, and ousing ferrous oxide, the tunnel guide regaled us with stories of bravery and cowardice, and the horrors of war. We walked under the city for nearly a mile, making our way past blast walls and holes left from the bunks and benches that lined the walls. For many nights, the good people of Newcastle, and the bad, sat and waited out the bombing of the city. Nights were especially long when planes made their way across the Pennines to the north western ports and factories, and dropped their remaining load as they returned.

In every place of fear and darkness, Christians seek to bring light in the name of the Light of the World. In the Victoria Tunnel, nearly 100 feet below the streets, and directly below St Dominic’s Church, we found a small metal cross on the wall. I was moved to think of men and women touching it as they passed, praying for peace and salvation, for body as well as soul.